When I first got to New Zealand, I called all the tall, frilly grasses 'pampas grass' since that's all I ever heard them called. Then I learned that the Maori called it 'toetoe' (pronounced toy-toy) and called it that.

Then I wondered if there was a difference and that's when the headaches began.

Of course, there's a difference. According to Trees for Survival,

'Do not confuse Toetoe with the introduced species of pampas grass, which is a troublesome weed in many places. Our native toetoe grasses flower in spring and summer, while the pampas flowers in the autumn. Pampas also has tightly curled dead leaves at its base, and the leaves snap readily when given a sharp tug (toetoe leaves do not). '

I don't notice the season when I'm taking pictures and I don't remember to look at the leaves, much less tug one on to see if it snaps readily. I just like the way they look when I see them on the side of the road. 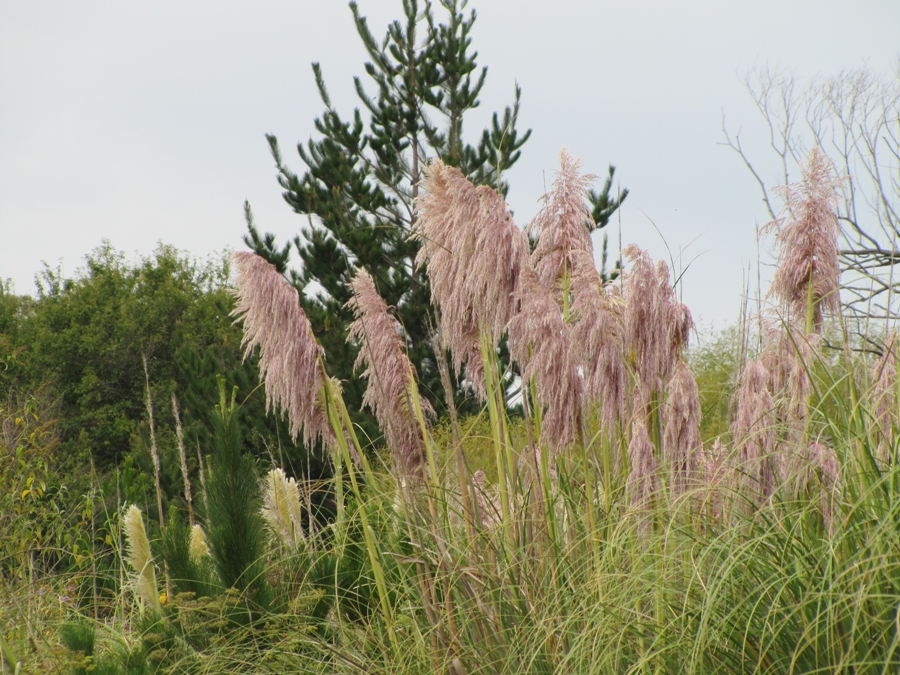 The shot below was literally taken on the side of the road, far far from any human habitat, that I could see. According to the articles I have read, it must be pampas, but it's anyone's guess how it got there. 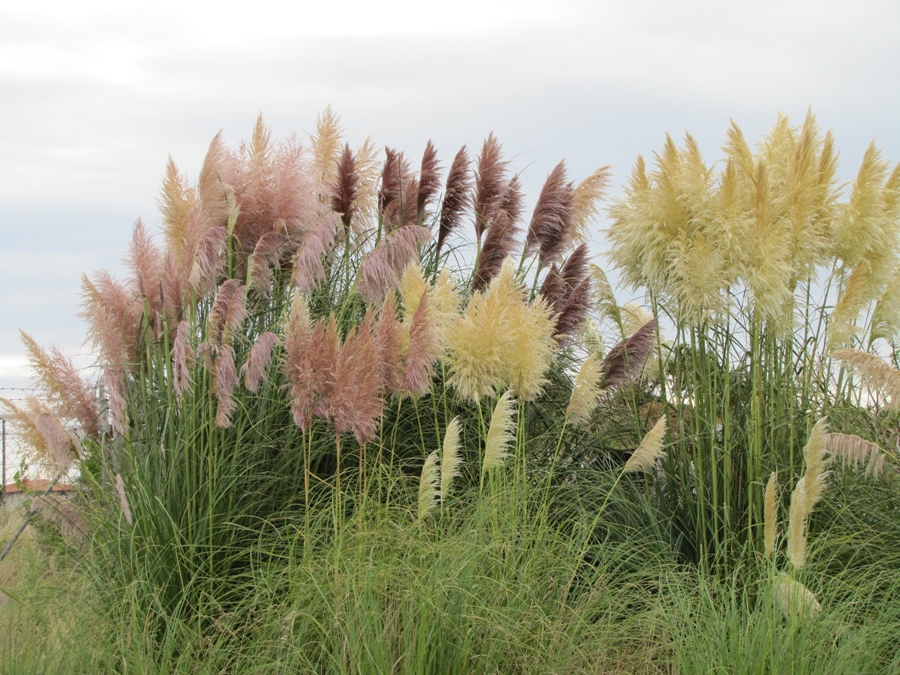 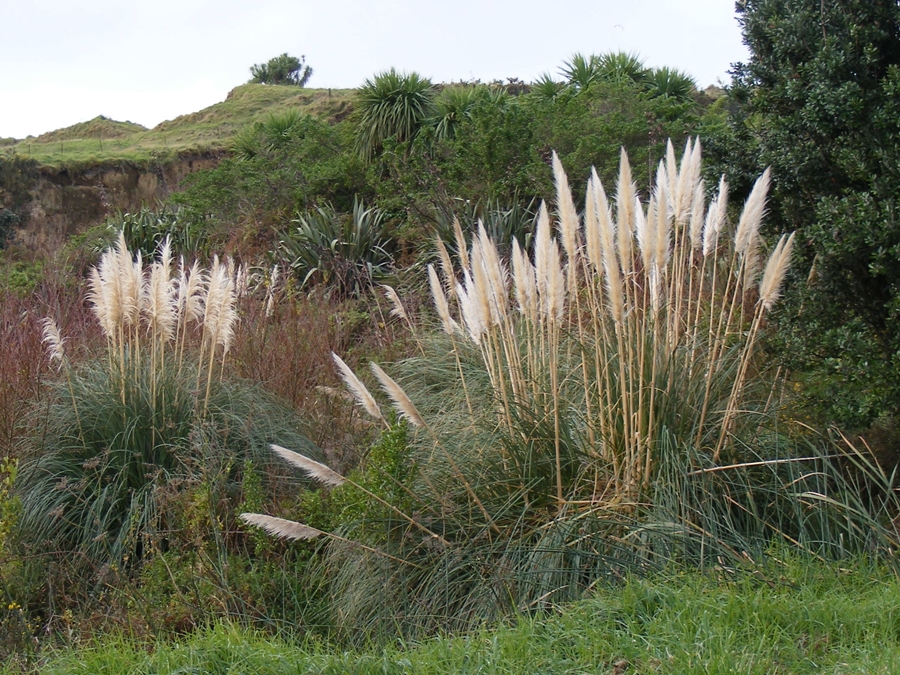 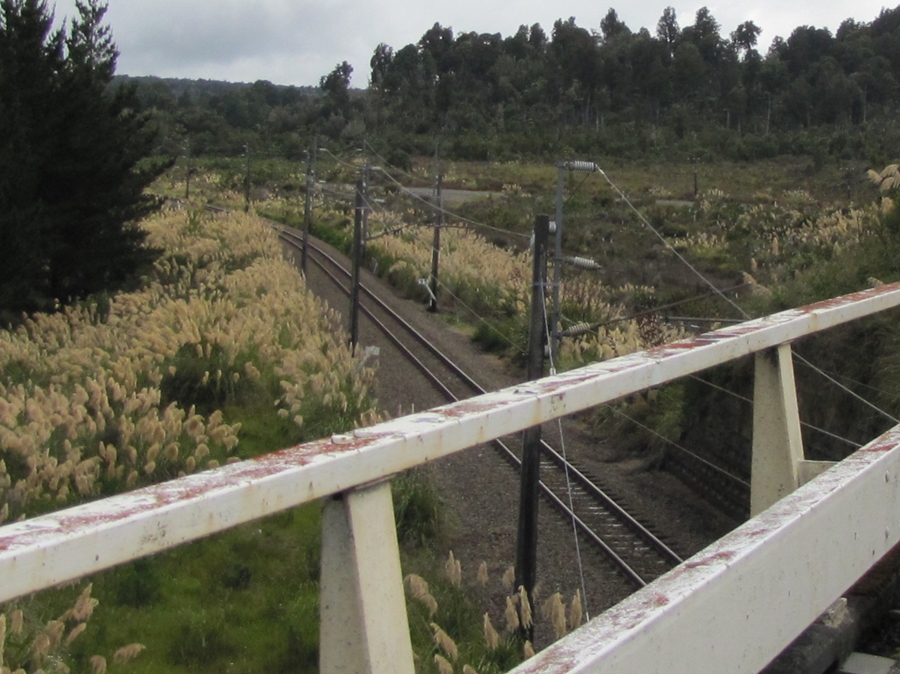 The next two pictures were taken at a historical Maori site, Turuturu Mokai, so I do wonder why it would have pampas instead of toetoe. Is it any wonder I'm confused? 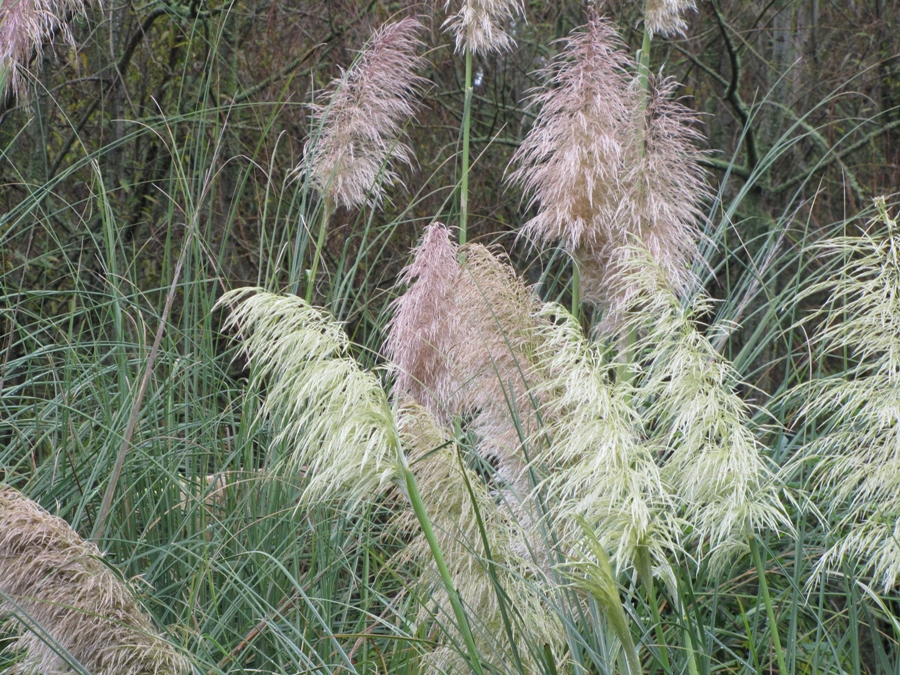 Hari OM
Similar problem in OZ of course... though they have their own version of 'toeotoe' which has been outstripped by the invader. Like so many introduced species, the pampas is still such a lovely thing to look at. ...sigh... lovely variety of shots here! YAM xx

I love our toi toi plants, fortunately for me they dn't make me sneeze, privet however does *sniff*

I had never seen the pampas grass until about the last 10 -15 years. It seems to be taking over. It seems strange to me that it is being planted along our roadsides (state highways) instead of the native toe toe. But then who am I to question, lol.

Lovely collection of images in this post. I used to have Pampas in my garden and the birds look to hang on it and eat the seeds. That was fun to watch.

Some seeds are spread very effectively on car tyres so perhaps that explains the roadside location. Pampas grass became such a popular plant in British gardens that it became something of a cliche and then of course became deeply untrendy.

Yes Betty, pretty to look at but is a problem when it is spread by the winds and birds.and ends up in farm paddocks. I think agapanthus is considered a weed too. We have similar introduced plants that take over native bushland here in Australia too. I do find the pampas grass pretty when in masses.

They are beautiful photos no matter what they are or how you pronounce them. I know what you mean about the headache beginning. In nature, it does sometimes seem like the more you learn, the more there is to learn.

Years ago, I had a bad experience with pampas grass at a cocktail party; the hostess had tall vases of them on each side of her fireplace. I was wearing a kind of velvet-like dress and as I was talking and eating and drinking I accidentally backed into the grass and came away with my (ample) backside covered with clinging grass. (Her decoration didn't look too good either and there was no way I could pretend it wasn't me.) Not one of my finer moments ))).