...from the airplane window. 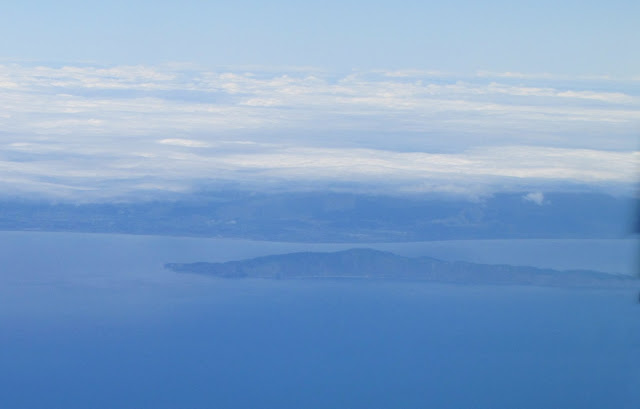 Kapiti Island is a bird sanctuary about 5 km off the western coast of the North Island, about 51km from Wellington. You can visit it, but I've heard that you must wade in the water to the shore to insure you are not carrying any pests of any kind. The number of visitors is very limited and you need to obtain a permit to land there.

"As a young boy growing up in Pukerua Bay, Peter Jackson would look across to Kapiti Island and dream it would make the perfect Skull Island, home to the hairy hero of King Kong.
When he came to film his 2005 re-make decades later, Lyall Bay and Shelly Bay ended up being the location for Skull Island.
However ocean scenes aboard the steamer Venture were filmed around Kapiti Island, a protected bird sanctuary off Wellington's Kapiti Coast.
Jackson and his crew ended up having to make an unscheduled visit to the island in March 2005 when they had to abandon the Venture because the boat began to take on water during filming, flooding the engine room." http://www.wellingtonnz.com/sights_activities/film_locations/kapiti_island_nature_reserve

Were you in the plane? It is beautiful.