My story of the Three Sisters

For those that don't google things asked why there were only 2 Sisters in my photo but are called Three Sisters.

Once upon a time, along the coastline of Taranaki, there were four 'stacks'. It seems that they had no name but were still beautiful to see.  After the turn of the 20th century, one was reclaimed by the ocean, leaving what were eventually given the name of the 'Three Sisters' and people came from far and wide to take their photograph . Click here to see a photo.

In 2003, one of the sisters disappeared in a storm but no one had the heart to call them Two Sisters. That would have been a cartographer's nightmare and there was so much signage that would have to be changed.

Eventually, a third stack arose again, as  pictured below, but apparently, it wasn't good enough to be called a Sister. 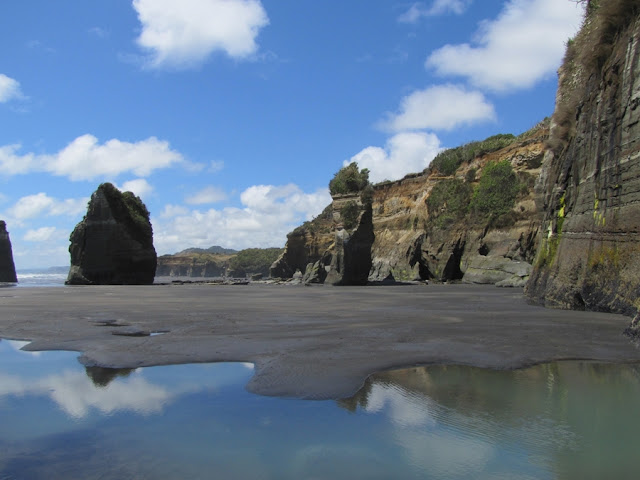 And then, sometime in 2014,  after much erosion and hard work by the ocean, an appropriate 'Sister' emerged from the coastline. The local newspaper declared that it was, indeed, a new addition to the family and now the Sisters are three again. 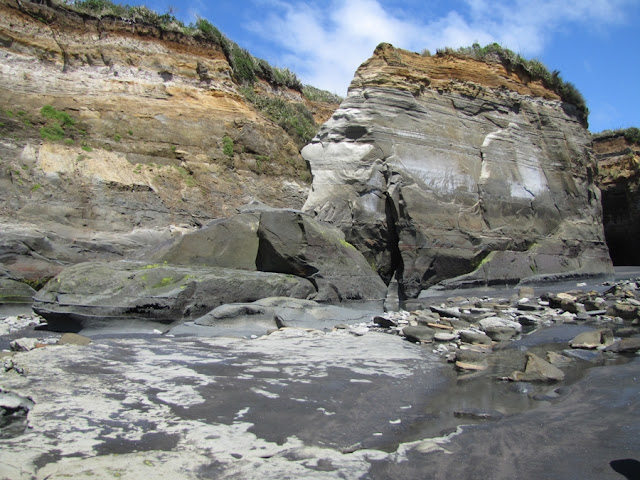 We shall watch with bated breath to see if it becomes an animal companion to the lone elephant that keeps the Sisters company. 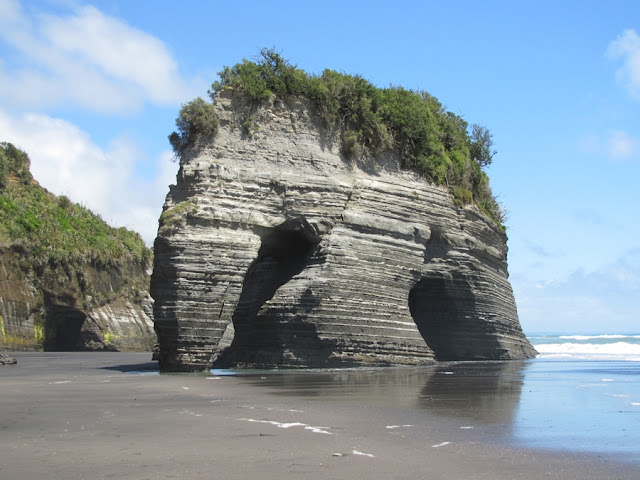 Check out that View

Show me your Sunday

Sunday in my City

Labels: 3 sisters, check-out-that-view, elephant rock, show me your sunday, sunday in my city

Hello, great post and story. I love the rock elephant. It is a beautiful coastline. Have a great new week ahead!

Hari Om
My goodness, it happens quick round your coastline! You'll be familiar with the Apostles in South Australia? Similar sort of story, where the 12 have been reduced - but a I am not sure that replacements are arising so fast!!! Lovely post. YAM xx

great story...and I love the elephant!

HI Betty I google everything, in fact I do not know how I managed without it. these are lovely images.

Fascinating photos. It is amazing how much the coast line can change over a relatively short amount of time.

Well now see if we'd all gone off and looked up the answer to our question, you wouldn't have had a reason to post these beautiful pictures. So playing dumb paid off for us. (Not a good life lesson probably, but it was much more fun to hear the answer from you than from dry old Mr Google or Ms Wikipedia ;>)!)

Thanks for the information -- it really is quite special and amazing to see how the earth changes!

Cool formations and neat story behind them! Thanks for sharing.

That's a fascinating story - and an amazing landscape!

Hello,
Great pictures of these famous rocks.
It's good to see and hear the story about that place. Very nice!!

Since I also have three sisters, this was quite fascinating. I'm glad to see a third sister added back in and maybe now to watch the shaping of another animal.

I love this! So interesting and beautiful.

What a fantastic story and illustrated perfectly with your photos. Thanks for linking up to #CheckOutThatView x