Our holiday adventure took us to Lockmara Lodge where they have lots of thing to do as
well as overnight stays.
We only went to the Underwater Observatory where Galen-from-New-York gave us
a tour in three stages. First he  tried to lure a local stingray, but it didn't show up until later!
Second was a 'touch' tank which was fun--shown in the top row of photos and large
photo on the right. 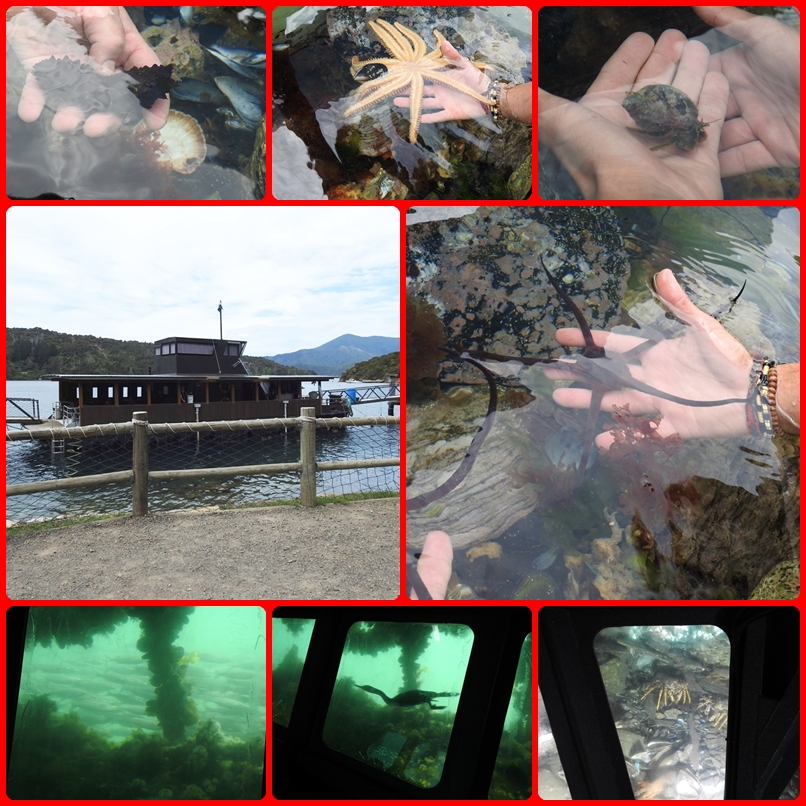 Then we went down to the observation seating of an old glass-bottom boat that is permanently
moored. As the fish swam past in a huge school, the cormorant/shag kept swimming by!

Lochmara Lodge is such a wonderful place - thank you for sharing.
Happy MosaicMonday!

That must be an exciting place, especially so if the creatures are wild rather than an aquarium?

It must be fantastic to have the possibility to touch the marine fauna!

Hello, it looks like a fun place to visit. I would love seeing the underwater sea life.
Great photos and mosaics. Happy Monday, enjoy your day! Wishing you a great new week ahead!

You can take a lot of impressions there.
Have a nice day!
Loretta

How amazing to be able to touch these creatures! WOW! A beautiful place to visit!

Great place to visit and see just what goes on under the water.

What an interesting place to visit. The sea is amazing.

Looks like a good place to be. Have made it as far as Australia but not to NZ. Don't think we will ever make it now, too far and too expensive 😒 Thanks for the comment, have a good week Diane

I have stayed there. The accommodation was great as were the walks and food in the cafe. Heartily recommend it. A great place for photography too.

Out on the prairie said...

What a great area to enjoy. I like to watch the underwater life from a good view like you had.

My granddaughter would have enjoyed this place!

What a fun tour! That cormorant looks like fish a itself under water. No wonder they catch a lot.

That touch tank would have been fun.

Betty - now I have a hankering to go scuba diving! I miss all the sea creatures. Thanks for sharing this unique experience with all of us at Mosaic Monday!