We visited this church (quickly) when on a riverboat cruise a few years ago in Wanganui. 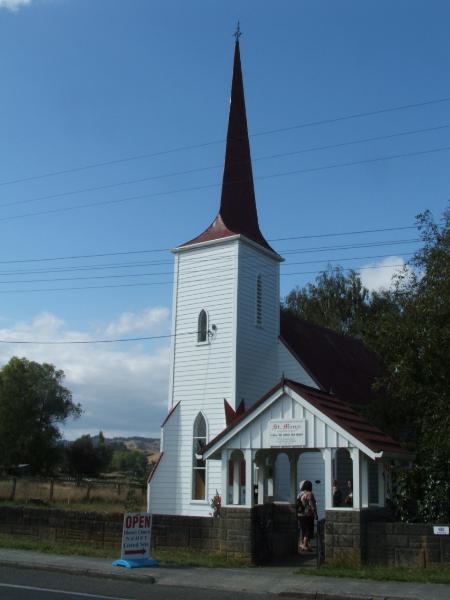 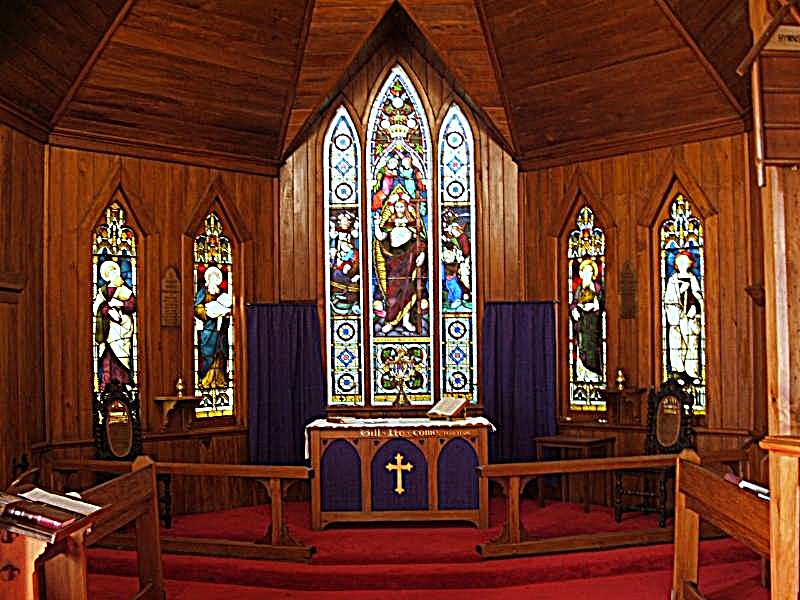 This historic place was registered under the Historic Places Act 1980. The following text is the original citation considered by the NZHPT Board at the time of registration.
St Mary's Anglican Church at Upokongaro was dedicated on 11 November 1877 and was the first church in the Wanganui Parochial District. It was built by Mr J. Randal to a plan submitted by Wanganui architect, Mr E.C. Morgan. It was not declared debt free until two years later and on the 20 July 1879 was consecrated by the Bishop of Wellington and named St Mary's.
Among the many endowments are three stained glass windows imported from England by Mr & Mrs H. Montgomery in memory of their son, Archibald, who was drowned when the 'Avalanche' sank in the English Channel in 1877. The distinctive feature of St Mary's is its unusual spire which is designed to rise from four corners at the base to three giving the impression that the spire is leaning.
The church in its rural setting overlooking the Wanganui River is a landmark and a symbol of pioneer faith.
http://www.heritage.org.nz/the-list/details/163

The stained glass windows are just stunning and the detail in the wooden interior is beautiful.

Conclusive proof that a church doesn't need to be built of stone, or particularly old, or huge, to be beautifully conceived and constructed. Very nicely photographed too.

The stain glass windows are stunning. It is a beautiful looking little church.

What a steeple! The windows are outstanding. Tom The Backroads Traveller

i enjoy the stain glass windows. what a beautiful. it is very light outdoors in color and then you come indoors and see such dark wood. (materials) i wonder what the folks where thinking? so different. ( :

Love the interior. The stained glass windows are quite striking.

Hari Om
I think that spire is intriguing!!! YAM xx

The spire is fabulous! It is a lovely church!

It's beautiful. Small, simple but it has what a place of worship should have.

What a beautiful church, and history. The spire is unique, and I like the wood and stained glass.